Crazy Cherry Slots Not So Crazy for One Lucky Player 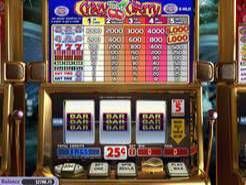 Play Now
Liberty Slots Casino has just announced another fantastic win and this time it was on the Crazy Cherry slots game . The lucky player who is known as Anja T won $45000 with just one spin of the reels. She was playing this crazy game through the mobile casino on her iPad and decided to up her odds and bet $9 per spin on with a five coin maximum bet. She landed three of the Crazy Cherry symbols and won the outstanding amount of $45000 all in one go.