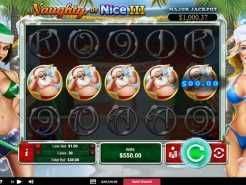 Play Now
It’s getting close to Christmas… or at least close enough for RTG to release another take on their popular Naughty or Nice series of games. This festive sequel is the third in the series, but will it beat the other two? The girls are waiting in their festive hats and not-so-festive bikinis, so let’s see what they can offer, shall we?

How many reels and win lines does it have?

It has five reels with 30 lines in play. These are fixed.

Is the game available for all platforms?

Yes, so you can download it, try the instant play version, or access it on your mobile device if you prefer.

Find three scatters and you’ll win seven free spins. Before your games begin, you will be asked to select one of the girls to add a 2x multiplier to any relevant wins. You will also secure either the Naughty Girl Bonus or the Nice Girl Bonus. If you win the Naughty Girl Bonus, she will do one of two things. She may appear as a stacked wild on the first reel throughout the spins. She might instead substitute for scatters. If you get the Nice Girl bonus instead, she will play one of two roles. The first one is to appear permanently over the fifth reel, but the second would see her cover reels four and five throughout the games. Finally, find three more scatters and you’ll win another five free spins. The slot also includes a random lucky feature, triggering either the Naughty or Nice III feature or between five and 10 free games in the Lucky games feature. Phew!

This seems almost certain to eclipse its predecessors, and that is saying something. With the chance to play some entertaining Christmas spins here, watch for Naughty or Nice III slots to appear at one of your favorite casinos soon.
Play Now

Where to Play Naughty or Nice III Slots