Playtech Delivers Two Batman Slots - Which One Is Best? 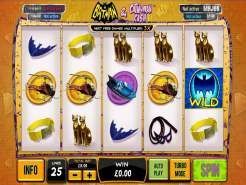 Play Now
Batman is surely one of the best-known superheroes around today. He has graced his own TV show – several decades ago – and been the main star of many movies since then. Playtech has created two slot games based around the character. Will one of these prove to be better than the other? Let’s find out.

Batman has begun, so we should pick this as our first stop too. We get a snowy background behind the five reels, with the familiar characters from the movie – Batman included, of course – appearing over the grid. There are four progressive jackpots available if you play with real cash. Five locations are included in the game, and there is a special feature to trigger in each one. The ticker above the reels must be completed to progress to the next location in the game. Each location has its own wild with a special way of behaving. Flower wilds, spreading petrol wilds… you name it, you’ll see it!

Batman vs Superman: Dawn of Justice

Did you see the movie? There is no need to have seen it to play this slot game. We get to meet Superman here alongside Batman, and the game features many elements, just as Batman Begins does. Playtech certainly puts a lot of work into these games. Those same four jackpots feature in this game, along with various wilds, each featuring either Batman, Superman, or Wonder Woman. Yep, she is here too! The Batman and Superman wilds are shifting, so when they appear they will move from one spot to another on subsequent spins. You can also secure Batman vs Superman free games, in which you select your favorite superhero. Throw in some Dawn of Justice free games too, with Wonder Woman as the wild and main character, and you can enjoy plenty of action here.

Do we have a favorite?

No – that is the simple answer to this one. We love the changing locations in Batman Begins, while the Batman vs Superman game gives us all those wilds and the two versions of the free spins feature too. There is much to enjoy in both these games, that’s for sure. We would also make it clear there is no need to be a superhero fan to enjoy them. There are enough features in play to make both these games a lot of fun to play.
Play Now