Queen of the Crystal Rays Slots 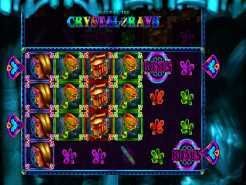 Play Now
An abandoned temple, some detailed graphics, the queen of the title, and those crystal rays. We are all set for a dramatic time playing this slot game, aren’t we? We have delved into this mystery and come up with some answers for you. Read our review to learn more about this Queen of the Crystal Rays slot game.

About Queen of the Crystal Rays

It is certainly a dramatic title and one we think is going to catch the attention of many players. It doesn’t reveal much, yet that is part of the appeal.

This is another slot to add to the Microgaming collection, where you can already find hundreds of potential games to try.

You can expect the usual demo to try first

We’d suggest you do try it too, so you can see what the game can offer you.

The theme for Queen of the Crystal Rays

This is a fantasy slot with a mystical sense to it. We like any fantastical slot game theme, so this one immediately appealed to us.

The colorful title makes the Crystal Rays part of it look almost like a rainbow. There are lots of crystals appearing on those reels too, and while the background fades almost into insignificance, the game itself certainly does not.

Reels, special icons, and more info about the game

There are six reels in this one, so it immediately stands out. There isn’t a progressive jackpot here, but there is a chance to get up to $129,872 in prizes. Several game symbols have the power to appear in stacks on the reels. This improves your chances of getting matching icons appearing on consecutive reels to trigger a prize. You can expect to spot a wild during play, reacting in the normal way. Watch out for the 2x wild too though, as this carries the requisite multiplier to enhance your prize if it helps you snag one.

Does the slot have lots of paylines?

It uses 25 active lines. However, there is a chance to see double… as we’ll explain in a moment. The game does use a payout method called Any Adjacent Wins, which means any adjacent identical symbols produce a payout.

What is the minimum bet amount?

You can begin play from just 20 cents a time. The maximum is $50 per spin, with lots of other options between those two extremes.

It tells you all about the regular and special symbols, along with the various features included in the game. We’d advise you to read it first.

Look out for the Crystal Ray bonus, occurring randomly on any spin in the base game. If this should happen for you, you can expect the Queen to appear. Remember we said the 25-line game could produce double that quantity? That happens in this feature. The Queen expands the reels to create 50 lines for you in that spin. The Crystal Rays are also put into action, bringing wilds to the screen and possibly some 2x multipliers as well. If three or more scatters are found in the base game, you can play the Crystal Rays Bonus. This contains four rounds in which various bonuses can be secured. There is also a chance to multiply whatever you find if you manage to do well enough.

It doesn’t appear so, no.

The Microgaming title comes in with an RTP of 96.7%.

Our rating for Queen of the Crystal Rays

This is a fascinating slot to watch thanks to the colors and sharpness of the graphics. We wish there were some free games to be won, but aside from that the slot can offer players a supremely good experience. We rate it as an 8 out of 10 game for those reasons.

Who might get the chance to play for the biggest prizes?

As a new release, this slot game from Microgaming hasn’t hit the headlines with any big winners yet. There are lots of chances to pick up big multiples on your wagers though, so who knows what might happen?

Play the demo to start things off

With several notable elements coming into action here, you can keep yourself busy playing the demo version for a while. Try different bets and see how everything works. It’s the best intro to a new slot.

Find Queen of the Crystal Rays at all good Microgaming casinos

If you like the demo enough to change over to the real game, most Microgaming casinos should have it ready for you.

This slot is produced for all platforms, including Android and iOS.
Play Now

Where to Play Queen of the Crystal Rays Slots