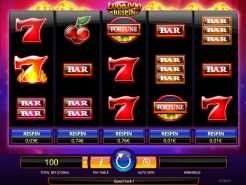 Play Now
A million coins… that could be worth a tidy amount even if you only wager a cent on each line of a slot offering that much in prize money. However, does the Million Coins Respin game really offer that amount? It does, but only under specific circumstances, as you might guess. We’ll find out what those are here, so you can see whether you want to play it.

We get five reels and 20 lines in this game, which is a standard mix of elements.

Start from as little as a cent on each of those lines, moving up to a dollar per line at most.

The wild can help you form winning combos while playing the slot. It subs for most things, but there are three icons that cannot be replaced by this. These appear as numbers – 10, 0, and 00. These are odd choices for symbols in any slot game, but there is a reason why they are used.

Let’s see how you could win a million coins while playing the game. Given there are five reels here, there is a specific combination of icons that must appear across them on the first line to trigger this prize. This would be 10, 0, 0, 0, and 00 in turn – 1,000,000 if you will. However, this prize would only be won if you were wagering the biggest bet on the line. You must consider whether your budget will give you that chance or whether it is too much to risk. We haven’t yet mentioned the respin element of the game. We’ll do so here. You do not need to use this, but it is good to have it as an option. The idea is that it gives you a chance to respin a reel following a regular spin of the game. If you do this, you will need to pay the amount shown at the bottom of the reel. The amounts vary according to the spin and the reel you wish to respin. The bigger the potential outcome for a reel spin, the more it is likely to cost.

Even if you don’t win a million here, there are plenty more prizes to shoot for in Million Coins Respin.
Play Now