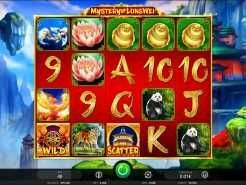 Play Now
One thing we should confirm from the outset is that you will not figure out what the mystery referred to in the title is all about. We might guess Long Wei is a dragon, given the way the slot game progresses, but it is nothing more than a guess. However, on the positive side, we can give top marks to the designers of this slot. The temples, the location, the depth of the imagery… it all promises to set up a very intriguing slot game indeed.

Expect five reels here, each with four icons on them, giving us 40 lines to bet on.

Look for a gold square inside which you will find a circular image. This is the wild, featuring that word in it too for easy identification. This substitutes most symbols to help make it easier to form winning lines. A dragon also appears in this game and is used as a bonus icon. This has an important feature associated with it. Meanwhile, there is also a scatter in play, showing a temple as part of the design.

Yes, you can win some free games by looking for three, four, or five scatters in a single spin. This would bring you either 10, 20, or 30 free spins, depending on how many of those scatters you found. These bring the added perk of some colossal symbols covering the center three reels. Those colossal symbols can also appear during the Dragon Colossal Spins bonus. Just one dragon must appear on reel one to start these. Each spin contains colossal symbols, while the dragon moves down one spot with each spin. Once it vanishes, the spins end and the base game begins again. However, more dragons might appear before the first one vanishes, so they could last longer than you think.

Is the mystery solved? We don’t think so, but we are not worried about that at all. There is too much going on here to worry about a mystery, as we have confirmed how good the game is to play.
Play Now

Where to Play Mystery of Long Wei Slots