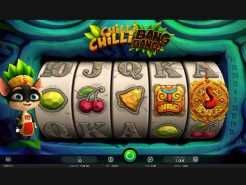 Play Now
We see where the creators of this game were going with the play on words in the title. A certain famous movie is referenced here, although the theme is based on Mayan culture rather than a famous car. That aside, the title does catch the eye and we guess that is the main attraction here. Watch for the little character standing to the side of the reels once the game begins. The Mayan theme continues with the rocky-looking reels stretching out towards us, adding depth that wouldn’t otherwise have been there.

Expect to see five reels and 20 lines in action in this game.

One cent per line means you can start with a 20-cent bet in Chilly Chilly Bang Bang slots. You can also wager much more than that, maxing things out at $20.

A chunky Mayan mask is put to work as the wild in this game. It will replace most symbols appearing elsewhere on those reels. Only the scatter cannot be subbed by it. The game shows this as a bonus wheel in similar colors and format to the wild.

If you find a bonus wheel on reels one, three, and five, you will play some free games. There is a chance only the first and third reels will reveal a wheel. This would result in a coin win boosted by a mystery multiplier. If the bonus is triggered, two sections of the bonus wheel will spin. The outer one will award up to 20 free games. The inner one reveals which type of spins you will play. The first option is to get spins featuring a growing multiplier. The second will bring you stacked wilds throughout your spins on the middle three reels. The third option would award wandering wilds, which as the name suggests do wander around when they appear on the reels!

This game looks formulaic to start with, although the format is a good one to look at. The complexity of the game is revealed when you begin to play, and it is one you could happily continue to spin on for a while. Try it now and see if you like it just as much as us.
Play Now