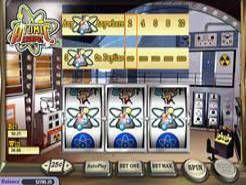 Play Now
The mad scientist makes an appearance yet again in this entertaining, simple and extremely fun slots game that has only one payline with three reels. What makes this game even more unique is that despite the fact there are a number of colorful symbols, there is only one payline symbol in the game which is denoted by the atomic symbol, the namesake of the game. When the Atomic symbol appears on its own anywhere on the reel it offers different amounts in prizes, according to the coin bet that has been placed for that spin. Players can place from one to five coins per spin with a coin range of $0.10 up to $50, giving plenty of options to each and every player with every level of budget.

With a single coin bet and a single atomic jackpot symbol, the player will win two coins, a two coin bet awards players four coins, and a three coin bet awards players six coins, A four coin bet with a single atomic symbol will award players eight coins and the highest payout for a single atomic symbol is 10 coins when a five coin bet has been placed. The winnings are also incremental in this way when a player lands three of the atomic symbols on the single payline. The minimum win for this configuration is 500 coins which are paid out for a single coin win and the maximum payout is 2500 coins when a five coin bet is placed and players land three of the atomic symbols on the payline. Atomic Jackpot slots also has a unique feature: the Stop Spin. Players can stop the spinning reels at any time before they come to a natural stop which gives each player more control on the game at every stage. The other symbols that appear in the game all relate to the whole theme of extraordinary nuclear experiments and include a blue and white atom, a nuclear physicist and nuclear symbols. Despite having only one paying symbol, this is a thrilling game with enormous potential rewards and plenty of action and fun to enjoy for every level of player with every budget.
Play Now

Where to Play Atomic Jackpot Slots