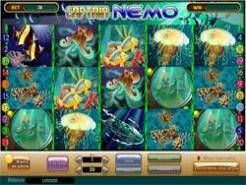 Play Now
Captain Nemo is one of the most famous maritime captains of all time but legend has it that he never spent much time in his impressive ship on top of the ocean bur rather in the depths of the deep blue ocean. In this five reels twenty payline slots game there are many different ocean symbols to be seen, including Captain Nemo himself. There are compasses and pearl oyster shells together with hidden treasure and many other exciting underwater symbols and characters that include seaweed covered jewels. This slots game has a progressive jackpot which is constantly growing with the more players that join the game and place real money bets. The jackpot can only be won in the bonus game.

Three of the Captain Nemo logo symbols trigger the bonus game where players are taken to a new screen and presented with a radar panel that is covered in 100 different glowing green spots. Players are invited to choose different radar spots that can reveal multiplying wins, prizes, jackpot tokens and strikes. Three strikes will end the bonus game and players are taken back to the main screen to continue playing the base game. Three jackpot tokens and players are taken to a new screen where they are presented with Nemo's special steering wheel. This wheel is made up of three different wheels and each one is spun separately. Players are invited to spin the first bonus wheel and if it lands on an arrow they are taken to the next wheel and then finally the third inner wheel where they have a chance to win the progressive jackpot. At any stage of this bonus game if the player does not hit the arrow they will still win the amount that is indicated when the wheel has come to a stop.

Captain Nemo is an incredible slots game to play that offers fun and excitement at every level of the game where players can win large amounts of money in the base game and work their way up to the final jackpot game by collecting jackpot bonus tokens to try their luck at spinning the wheel.
Play Now

Where to Play Captain Nemo Slots