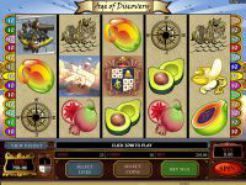 Play Now
The Age of Discovery Slots is a five reel twenty five payline slots game that immediately conjures up a picture of the famous adventurers and discoveries of an era gone by. Sir Walter Raleigh and his potatoes, Sir Francis Drake and his distant lands are all brought to mind in this colorful game where symbols include maps and compasses, exotic fruits and hidden riches all that were discovered by these intrepid men. Players can enjoy this game for fun prior to placing real money bets as there is no progressive jackpot. Coin sizes can range in size from $0.01 up to $0.50 and players can choose the number of lines and coins that they want to bet on each spin.

The ancient gold coin is the wild symbol and this can take the place of any other symbol apart from the scatter to make a winning line. Additionally the wild gold coin is also the highest paying symbol in the base game, when five of these lands on an active payline players can win as much as 60000 coins. The scatter symbol is denoted by the mystical dragon that offers multiplying wins that range from 5x the coin bet placed for two scatters anywhere on the screen up to 80x the coin bet placed when five scatters appear on the screen. There is a unique bonus game, or treasure hunt that is activated when three or more of the compass symbols land on any of the places on the screen at any one time. Players are then taken to a new screen where they are presented with an old but useful map of treasure and intrigue. There are thirty different spots marked on the map and players are invited to choose different spots that they believe the treasure is hiding behind. For each correct spot chosen players win a bonus payout but if they hit the skull and crossbones they are taken back to the main screen to continue playing the base game. With the all the bright exotic fruit that includes pomegranates, papaya, mangoes and more common bananas, this is a colorful and very entertaining slots game to play that reminds us of the great natural discoveries that were made by our ancestors, something we often take for granted.
Play Now

Where to Play Age of Discovery Slots