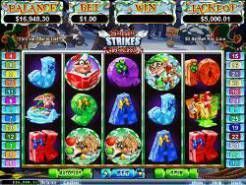 Play Now
For many Christmas and Santa are all about the softness of these characters and the lovely presents that they give out but in this game there is a lot more to Santa who is striking back and fighting against the naughty Rudolph to see who really rules the roost. There are five reels and twenty five paylines to this game that can be tried out for fun but of course in the fun mode the player is not eligible to win the progressive jackpot. When playing Santa Strikes Back! Slots the real money version of the game the player can place bets of varying coin sizes, from $0.01 up to $5 per coin per spin.

The Battle for Victory

Where to Play Santa Strikes Back! Slots