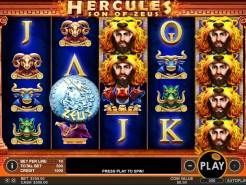 Play Now
Hercules Son of Zeus Slots is based on the ancient legends of Zeus and Hercules. The whole theme of the game is based on the Greek mythology and players will not the architecture of this ancient people that is evident with every spin of the reels and all of the other Greek symbols including coins and ancient monuments. There are five reels and forty paylines in this game of fortune that really does offer a lot to the player.

Zeus, the father of many gods especially Hercules appears stacked on all reels giving players more winning payouts. The temple where Zeus, Hercules and all of the other gods reside is the wild symbol that substitutes for other symbols to make up a winning line and offers handsome payouts on its own.

The Hercules Son of Zeus Slots game runs very smoothly and each time a win is achieved the winning symbols react. Players who like to sit back and watch the spinning reels rather than manually pressing for each spin can opt for the auto play button. By choosing the auto play button the player may preset the number of spins that he wants the game to run for, one after another, and at any time he can stop the auto play and revert to the standard manual play. Hercules Son of Zeus was a man of valor and a man to be looked up to. This slots game just gives players a small taste of the incredible Greek culture that whose teachings live on today.
Play Now

Where to Play Hercules Son of Zeus Slots