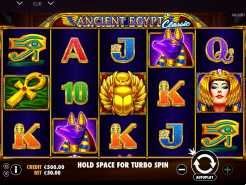 Play Now
Ancient Egypt Classic is the title of a slot game that fails to keep anything under wraps. It tells us the theme and it surely is a classic. But will this game from Pragmatic Play prove to be a classic as well? If you have tried your luck with similarly-themed games before, you are bound to recognize some of the elements in play here too. But is that enough to give this game five stars?

Quantity of reels and lines

We have five reels to play on to begin, and these provide 10 lines to bet on.

While this game could be played as a penny slot, there are enough variations to allow for larger bets too. For example, coins can reach up to 50 cents each, while up to 10 of your chosen coins can be wagered per line.

The scarab beetle may not be something you’d like to see, but you will be delighted whenever it appears in the Ancient Egypt Classic slot. There is a good reason for that – it is used as a substitute and as a scatter symbol.

The beetles must appear in a set of three to unlock 10 free spins to play in this slot game. When you win the games, you will first see a randomly-selected symbol to be the expanding symbol. Whenever it appears, it will expand over its reel to try and award bigger prizes. Regular payouts will be granted first, and then you will see if you have won anything else with the aid of those expanding symbols. While this is the only special feature in Ancient Egypt Classic slots, you can retrigger it an infinite number of times. For each retrigger you manage, you get another expanding symbol coming into play for that new set of spins. It’s a nice touch that elevates this from your standard free spins feature.

The imagery, the icons, the free spins… everything you would want and expect from an ancient Egypt-themed slot is here. Ancient Egypt Classic was named this way for a reason. We think you will appreciate taking this one for a spin, especially if you like classically-designed games. Will this be your favorite Egyptian slot to play from now on?
Play Now