Gaming Off the Beaten Track

Play Now
Sometimes slots games take players to their regular lives, and sometimes players can enter a world of fantasy or a world that they never knew existed, offering them new knowledge and exciting insights. There are a number of games offered by multiple software companies that take players to different lands and communities that they would otherwise not known about. 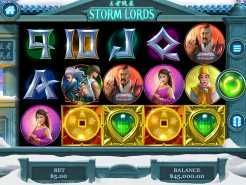 Storm Lords slots is set in Ancient China where the ancient Chinese lords rule the lands. This game from Real Time Gaming has five reels and fifty paylines. Players can try out the game in fun format for as long as they want. It is a game that can be played online or through mobile devices. The online version of the game can be downloaded to the players computer or the player can opt for the instant access version that is available to play directly from the web browser of the chosen casino. The mobile version can be played on any Android or Apple device at any time of the day or night through the web browser of the mobile device or by downloading the online casino app that sits on the home screen of the mobile device. The storm lords symbol is wild and appears on each of the reels where it can substitute for other symbols and complete winning payouts. There are three different scatters in this game of ancient Chinese lords and each one leads to different bonus games. Held wilds on reels 2 and 4 trigger 6 free spins and with the treasure coins appearing on reel 5, players trigger the bonus treasure game feature. This offers the player 3 re-spins with the treasure coins staying in place for each re-spin. If all the 15 positions on the screen are held by treasure coins, players are lucky enough to win the progressive jackpot. The pomp and circumstance of the ancient Chinese lords contributes to the attractiveness and enjoyment of this colorful slots game from Real Time Gaming that takes players to somewhere they would not normally visit. 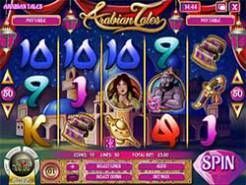 Arabian Tales from Rival gaming is a classic video slots game that takes players back to the time of ancient Arabian prices and Aladdin type stories. In this game, there are five reels and fifty paylines. Players can try out the game online or through mobile devices and when ready to place real money bets, they are offered a variety of coin sizes, being able to place bets up to $125 per spin and also make use of an auto play option where the player can preset the number of spins that the game runs for. Symbols in the game have an Arabian Persian feel to them and include books, daggers, a genie, magic carpets, lamps, tigers, and kings. After an introductory cartoon presenting players with the story of the game, the player can start enjoying the spinning reels and his visit to ancient Arabian lands. The lamp is a wild symbol that when appearing on screen expands to cover the whole reel and at the same time reward the player with 2x payouts for any paylines that it contributes to. The genie is the scatter symbol of the game, giving players multiplying payouts and at the same time triggering the free spins games. Three and more of the genies on screen triggers the free spins games. Three genies award 12 free spins, four award 25 free spins and five award 50 free spins. During the free spins that can be triggered again, all winnings are tripled. Magical lands and Arabian princes make this Arabian Tales slots game from Rival powered gaming, one of the best choices for getting off the beaten track.

A Night in Paris by Betsoft Gaming 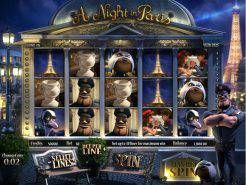 Paris for many is not off the beaten track, it is considered the most romantic city in the world but in this colorful 3D slots game, players are taken off the beaten track in search of the art thief who comes out at night and is looking to hijack some of the cities most prized art possessions. There are five reels and thirty paylines to this game that starts with an animated informative movie taking players through the back streets of Paris. Throughout the game players are entertained by the local policeman who stands at the side of the screen making comments and entertaining and encouraging players as the reels spin. Symbols in the game include the art thief, a croissant, the Eiffel tower, flowerpots, guards, a romantic couple and even two birds. Three and more of the artistic pictures on the screen trigger a bonus game called Caught in the Museum – players are invited to click on different pictures to win bonus cash prizes. Chase free spins are triggered when three and more of the police badges appear on the screen giving players instant free spins. Instant prizes are awarded when different combinations of policemen and other people in the game appear together. Playing A Night in Paris slots is a special way to get off the beaten track and take a player to something completely different where the dark streets of Paris are filled with action and adventure.
Play Now