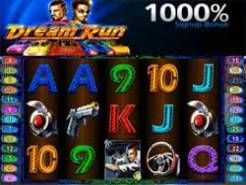 Play Now
Unlike other racing car slots games, of which there are many available online such as Good to Go, and this game has a number of bonus opportunities in addition to some great fun in the base game and two random progressive jackpots the Major and the Mini. Dream Run slots is a five reel twenty five pay-line game filled with many different colorful and exciting symbols that all relate to the racing car theme. There are two different bonus games in addition to two scatter symbols that contribute to the excitement of the game. Players can place bets in a number of coin sizes that range from $0.01 up to $5 and there is an auto play feature for players that want to preset the number of spins that the game will run for consecutively. Because of the random progressive jackpots, this game cannot be played for fun, only real money.

The racer is one of the wild symbols and when it takes the place of others to make up a winning payline the winnings for that pay-line are tripled. The other wild is the racers opponent but it does not increase winnings for a line, it only replaces symbols to help make a winning line. Three of the scatter green light symbols activates the Dream Run racing feature where players are invited to pick one of the five cars presented to race. The positioning of the car in the race will determine the number of free spins that the player wins and if the chosen car lands in the top three of the race players receive an additional chance to win up to a 100x multiplier to accompany the free spins. The Nitro racing feature is activated when players have collected 10 of the Nitro symbols in the base game they are taken to a new screen similar to that of the Dream Run feature and can also win up to 25 free spins. Dream Run slots is a fast paced action packed game with bright colors and great music that accompanies each and every spin of the exciting reels.
Play Now

Where to Play Dream Run Slots