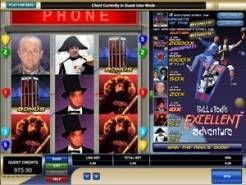 Play Now
The classic movie, “Bill and Ted’s Excellent Adventure” has now come to slots so if you were a fan then be sure to try this slot game. This one has three reels and five pay lines with a maximum jackpot of 2,000 coins. For all the bells and whistles, download the game or you can play the flash version which is accessed instantly. Play with coin values of a dime up to ten bucks a spin.

The Wyld Stallyns symbol is the wild symbol which can be substituted for any other symbols to create more winning combinations for you. The wild symbol cannot be substituted for the Phone Box symbol. It also cannot be used to initiate the Circuits of Time Bonus Feature. The scatter symbol is the Three Phone Box symbol. Some of the other symbols include Napoleon, Abraham Lincoln, Genghis Khan, Rufus and Bill and Ted. Bill and Ted are the Multiplier symbol, which can win you more than 2 000x.

The Circuits of Time Bonus Feature game is only one of the bonus games available. You get this one going when you get three scatter symbols anywhere on the reels. This is where you win free spins or Winspins if you shoot at different planets. You can be the shooter or have Bill and Ted do your dirty work. There is also another bonus game, the Guitar Bonus Game. This one is activated randomly.

Try Tomb Raider slots which is a five reel and 16 pay line video slot game. It can be played for as little as 0.01 or for as much as 75.00 per spin. The top jackpot is worth 37,500 coins! The symbols include a tiger, Lara Croft, a Tomb Raider symbol, Golden Idols, and the high playing card symbols.

Next, try Trick or Treat slots . Play with coin values of as low as a quarter and as much as $15. The top jackpot is worth 4000 coins. This game has a Halloween theme that has three reels and three pay lines. Three Witch symbols will win you the top jackpot! The symbols that you can find in this game include a witch, a black cat, a Jack-o-Lantern, a bag of loot and bars. The Witch is the wild symbol and the multiplier symbol while the Jack-o-Lantern is the bonus symbol. Bill and Ted’s Excellent Adventure Slot is a great ending to the perfect movie. Try your luck and see if you can do better than Bill and Ted did!
Play Now

Where to Play Bill and Ted's Excellent Adventure Slots