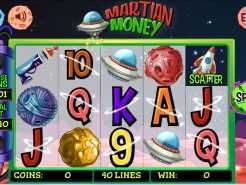 Play Now
If you wanted to try and scoop some cash, you wouldn’t go all the way to another planet to find it, would you? It doesn’t seem like a good proposition, but you do get the chance to play for some Martian Money in this slot game of the same name. We love the look of this game, which takes on a cartoon feel without introducing any real aliens. Except… is that an alien looking more like a planet on the paytable? Let’s find out more.

This game is very generous with its paylines, offering 40 of them for you to bet on. You can play these lines spread over five reels too.

With a single cent available as the starting amount in Martian Money, playing a 40-cent bet covers every line in the game. There are larger coin values available too, so check those out as well.

Martian Money symbols worth looking for

Are you ready for the fun to begin? That can happen for you if the wild icon shows up on the reels. This replaces other icons to make it easier for you to win some prizes. It looks like a planet with ears – yes, you did read that correctly! It appears to be a happy smiling alien, so that’s good news. Meanwhile, there is a space rocket that acts as a scatter symbol. You will need three or more of these to unlock a scatter prize worth between 40 and 400 coins.

Are there any bonus features involved?

You bet there’s a bonus! You will need to find three, four, or five of those space rockets in a single spin to qualify for some free spins. The amount won depends on the number of rockets you found. Three will bring a healthy 12 free spins. Four rockets will up that amount to 20. Finally, five rockets will deliver an impressive 40 free spins. The more rockets, the better, as you can see. These games are played on a different reel set. You will also get some multipliers coming into play here, dependent on how many wilds you get in a free game where prizes are won.

Could you win some Martian Money by playing this game? Try your luck today and see whether some cash from Mars will come your way.
Play Now