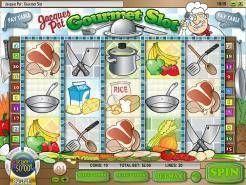 Play Now
Isn’t Jacques Pot the best name for a gourmet chef? Think about it – we’re talking about a jackpot here. You will get the chance to try and win the top prize of 500 coins in the main game, or 200x your bet in the bonus. More about that in a moment, though. The Jacques Pot: Gourmet Slot game brings us a cooking theme, with the chef himself appearing among pots, pans, and ingredients. What will you find when you step into his kitchen?

The format in use here is one you’ll have seen before. We get five reels and 20 lines in action here.

Which coins can you play with?

There are just four coins in play, ranging from one cent to a quarter. You can play up to 10 coins on each line though, so you get more wiggle room than you’d think.

The cooking pot is worth looking for as it produces a chance to win the top prize of 500 coins. You’ll need five on a paid line to trigger this payout. Meanwhile, a salt and pepper shaker is put to work as an expanding wild on the first three reels. It doesn’t appear on reels four or five though. This has an unusual feature – if one or more wilds appear in a win, that win is multiplied by the number of wilds on the reels. So, if you get one on each of the first three reels, you’ll get a 3x multiplier as well. The mixer is also worth looking for, since this is a scatter symbol. Prizes – and a bonus – can be awarded if you find enough of them anywhere in a spin.

Are there bonuses to be won?

Three of the mixer icons will award you 10 free games to play. these come with an automatic 2x multiplier on every prize. Surprisingly, Jacques himself will only appear in the free games. When he appears in three positions at once, you get to play the Burger Creation bonus feature. Use your burger to catch the toppings that start falling from above. The more you catch, the better the burger will be, and the more you will win!

This is a superb game that is a lot of fun to play. Try it today and see if you can create the best burger!
Play Now