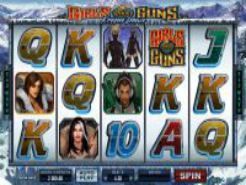 Girls With Guns: Frozen Dawn is a five reel game that features 243 ways to win. This video slot has many symbols to depict the different girls and the guns they carry. The theme behind the game is a group of women who go about battling other evil women. Symbols within the game include the Girls With Guns Logo that is the wild. The logo symbol will substitute for all symbols except the scatter. The girls in the game are Kira, Alex, Maria, Zoe, Katherine, and Jess. Other slots game symbols include Satellite, Girls With Guns Logo, Face Cards and Frozen City symbols. This new game is similar to 243 way games such as Just Vegas and Cash Spin. The wild and scatter symbols add more bonus features to this slots game. Players can wager as little as $0.30. The jackpot for this game is as much as over 2 million coins for this slots game.

Where to Play Girls With Guns Frozen Dawn Slots